1. Are the Salt River horses wild and native horses or stray livestock/feral horses?

The Salt River wild horses are a historic population of unbranded, unclaimed, wild and free-roaming horses that were born in the wild and are now protected by State Law within our national forest.

Evidence indicates that wild horses have been living on the lower Salt River since well before the Tonto National Forest was created in 1902.  It is believed that the herd is descended from the Spanish horses brought to Arizona by Spanish missionary Father Eusebio Kino in the 1600’s.

The United States Forest Service (USFS) itself acknowledges that the horses have lived on the lower Salt River since the 1930s, but much earlier evidence of their existence can be found in the Arizona State Archives, in an Arizona Champion Newspaper article, dated January 25, 1890, which classifies horses in the Salt River Valley as “native stock.” To be considered native stock at that time, there had to be at least 5 generations who knew about them, so this article effectively dates them back to 1790.

Dozens more historic records and hundreds of eyewitness accounts chronicle the presence of free roaming horses on the lower Salt River throughout the modern era, into the 1970s, (when the Wild Free Roaming Horses and Burros Act was passed), to the present day.

The FS’ claim in 2015, that the Salt River horses are not “wild” is based on a 1974 letter that acknowledged “dense riparian vegetation … makes it very difficult to … even observe these animals.” The decision to deny the Salt River horses protection under the 1971 Act ran counter to the longstanding FS policy to manage these horses as “wild” and distinct from stray livestock prior to 1971. In fact, then FS Regional Rangeland Ecosystem Specialist Curtis M. Johnson stated that the horses “… were not considered unauthorized … they were considered wild horses” and managed as such throughout the 1960s under the Multiple Use Sustained Yield Act of 1960.

In a May 17, 1979, Phoenix Gazette article, Perl Charles, a former Forest Service official and noted conservationist (for whom many hiking trails are named) confirmed that the horses were wild and had been present on the Salt River “for 35 years that he knows of, and maybe since the turn of the century.” At the time, Mr. Charles was advocating for protection of the population of 40 to 50 wild horses, stating, “It’s a delightful thing to watch them running free.”

During his career with the Forest Service, Perl Charles estimates he rounded up and removed more than 3,500 head of wild horses within the national forests. Therefore, Perl Charles should be a credible authority on identifying wild horses, versus alleged “branded” Indian horses present at the time.

Simply put, the claim that these horses were stray livestock is not supported by historical or current evidence. No parties  — including neighboring tribes or the State of Arizona — claimed these horses in response to the July 31, 2015, USFS-published  “notice to impound.” Therefore, it may be assumed that they are actually wild horses and not stray livestock.

Update: The Salt River Horse Act, a bill that was passed and signed by Governor Doug Ducey in 2016, establishes that the Salt River horses are “not stray livestock”.

2. Do the Salt River horses help or harm the environment?

Of the 6 million annual visitors to the Tonto National Forest and the thousands of animals who call it home, the herd of free-roaming horses living along the lower Salt River is compatible with, and supportive of, a healthy ecosystem. 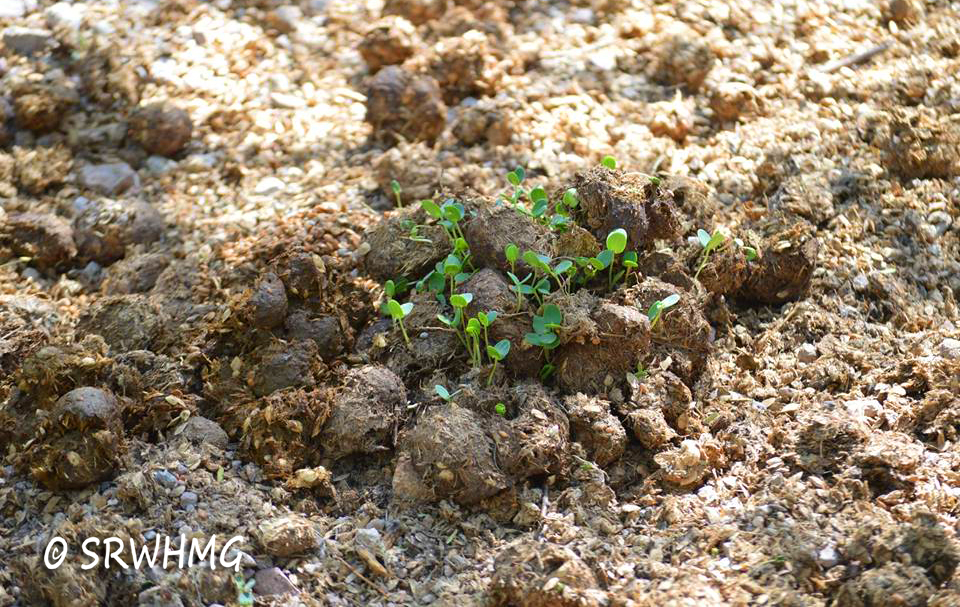 There are no scientific data published in any peer-reviewed journal about the Salt River wild horses or the lower Salt River habitat. 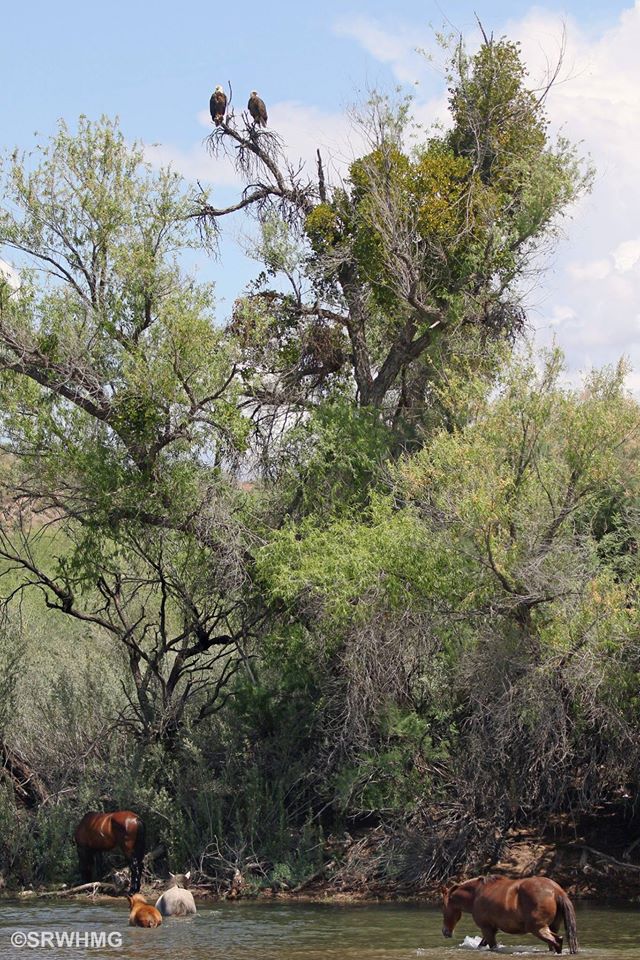 Claims that these horses pose a threat are based on scant research in other  geographic regions that are not relevant to the lower Salt River region. And the data from these regions indicate that wild horses have both positive AND negative impacts and environmental benefits, much like ANY other wildlife species, including birds.

In fact, the 18-mile stretch where the horses still exist is one of the most biologically rich areas along the entire 200-mile river, in spite of the human caused challenges it faces. Photo-documentation accumulated by members of the Salt River Wild Horse Management Group supports this observation with evidence over long periods of time. That evidence shows healthy and growing trees, seedlings sprouting from horse manure, abundant plants and flourishing wildlife diversity in the very area on the river where the horses roam.

Bald eagles on the river have been making a comeback since the early 1980s, and eagle nesting was particularly successful this year in the exact area that the horses call home, according to the Audubon Society.  The horses and the bald eagles have been cohabiting  together successfully and may even have a symbiotic relationship.

The Salt River Wild Horse Management Group cares deeply about the area, not only about the wild horses, but also about the birds, the environment and all other wildlife. We look forward to working with the USFS and conservation groups in any and all projects that improve the environment and benefit the ecosystem in which thousands of species have been harmoniously cohabiting for centuries. The lower Salt River should be preserved as is for future generations to come.

3. What are other pressures on the environment in this area?

The lower Salt River faces a myriad  of human-caused challenges that should be addressed before scapegoating wild horses. 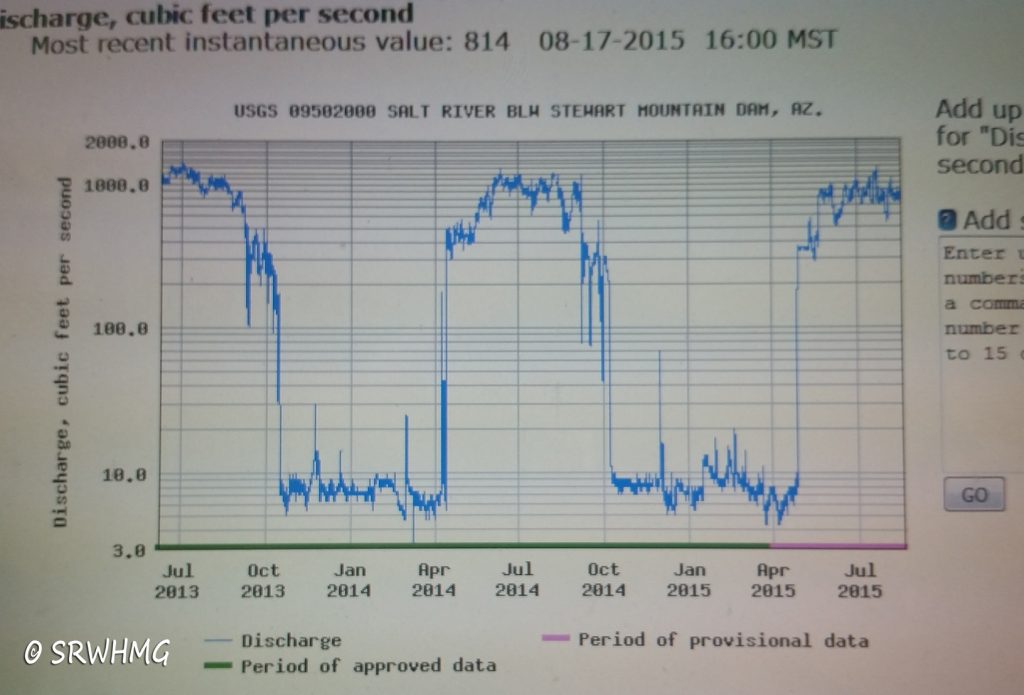 The Salt River ecosystem in the Tonto National Forest is impacted by many factors, including agricultural activities and heavy recreational use. The Salt River is heavily littered with trash, and the bottom of the river has accumulated several layers of aluminum cans in certain areas. Legal, as well as illegal, recreational use has impacted the riverbanks and the soil conditions. Items such as fishing wire, lead bullets, metal and downed barbed wire pose a serious safety hazard to wildlife, as well as to people and wild horses. The Salt River Wild Horse Management Group members pick up bags of trash on the river daily.

In addition, the health of this natural habitat is heavily impacted by Salt River Project’s policies regarding water levels and the volume of water released from the Stewart Mountain Dam.  At times during the winter, the river actually runs to just a trickle.

Water levels, obviously, have a significant effect on plants and animal life in the area. We believe this to be a potential source of adverse outcomes in the riparian areas along the Salt River.

5.  Why is it so important to preserve these wild horses?

It is crucial that we make informed decisions based on what future generations of Americans would want us to do.

These wild horses are important to the local, environmental and global communities for many reasons, including recreational enjoyment and economic, cultural and educational contributions. The herd is iconic, representative of nature at its best: wild and free. It is also accessible — tourists and photographers come from all over the nation to see these wild horses.

According to the U.S. Fish and Wildlife Service, the wildlife viewing industry in the U.S. garners a figure that grows every year. Wild horse ecotourism, in particular, is on the rise. Madeleine Pickens’ Mustang Monument Wild Horse Resort in Nevada draws international tourists willing to pay more than $1,000 per night for the opportunity to spend time with mustangs. On the Salt River, visitors can spend an entire day with wild horses for  just $8 — the cost of a Tonto National Forest day pass. The Salt River wild horses draw visitors to the area, providing a boost for local businesses and the economy.

These horses are also important to the Salt River Pima and Fort McDowell Sovereign Nations and as such are protected by both tribes because of the horses’ long and rich heritage with indigenous peoples and because of their historic and cultural significance.

Children of all ages benefit from the presence of these horses. Local high schools have taken their classrooms outdoors to study the wild horses. Very few urban areas exist where students can travel a short distance to gain tremendous experiential knowledge in an outdoor classroom that extends beyond a school’s four walls. Educational seminars about the wild horses are offered routinely by Ranger B at the Usury Pass Center on the Salt River.

6.  Who supported protecting these horses?

The USFS notice of intent to remove the Salt River’s free-roaming horses provoked strong public outrage in 2015. Hundreds of people attended rallies, thousands of people contacted the forest service and our elected representatives in Congress and the State House have spoken out, as well as U.S. Senators Jeff Flake and John McCain, U.S. Representatives Matt Salmon, David Schweikert and Krysten Sinema, and U.S. Representatives Martha McSally, Ann Kirkpatrick, Michelle Lujan Grisham, Krysten Sinema, who all sent attached letters to the USFS. In addition, the Salt River Pima Maricopa Indian Community released a strong statement of support  for the protection of the horses. And, hundreds of organizations and businesses, as well as literally thousands upon thousands of people, were strongly opposed to the removal of these animals. In fact, nearly 300,000 people had signed a petition calling for their protection. It was this unprecedented outrage that saved the Salt River wild horses for future generations of Arizonans to enjoy.

7.  What is the current management arrangement? 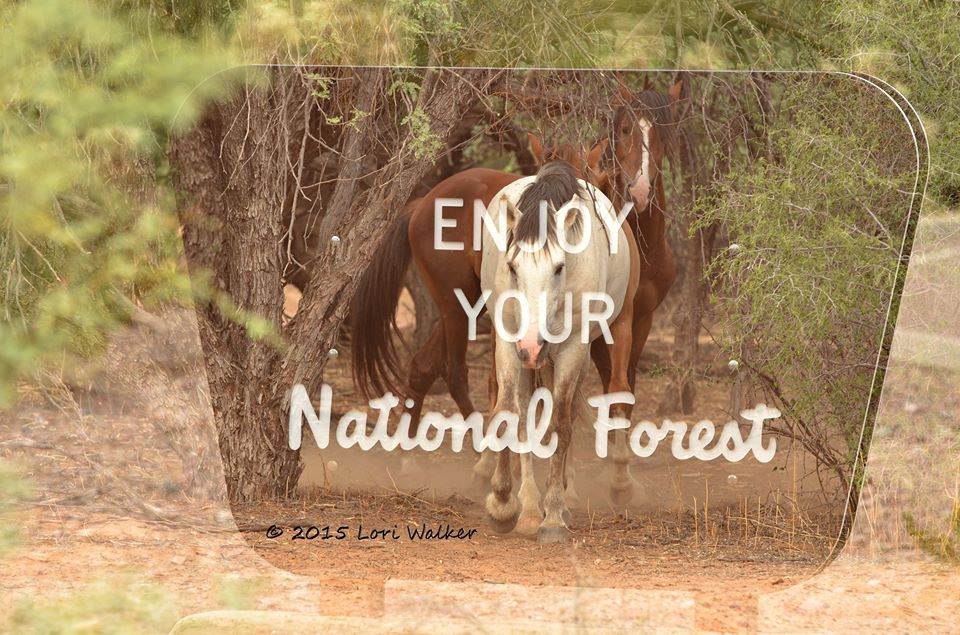 While almost gone forever, today the Salt River wild horses are protected pursuant to Arizona Revised Statute 3-1491 (aka the Salt River Horse Act). This partnership between the Federal government, the State Government and a Non Governmental Organization (NGO) is a one of its kind and our groundbreaking program is finding the balance between it all. Key components of the humane management plan include:

Please connect with us through our

Thank you for your support!

“History is only made by people who care about the future”.  -Simone Netherlands.

SearchPostsLoginCart
Nature can be cruel, but also has its reasons.
Awful! Another wild horse in a cattleguard!
A moment of silence in remembrance of 9-11 …
Welcome to the herd, Moonshadow!
Sunset dining with the Salt River Wild Horses!
💕Special black foal born in the Salt River Herd💕