The Salt River wild horses are a historic population of unbranded, unclaimed, wild and free-roaming horses, that were born in the wild and merit protection within our National Forest.

How long have the Salt River wild horses been here?

According to Arizona’s own historical records, wild horses have been living on the Salt River and the Salt River Valley since well before the Tonto National Forest was created in 1902, but more likely much  longer.

For people back then to classify the free roaming horses as native, there would have to have been a minimum of 5 or 6 generations who knew about their existence (equal to 100 years), proving they existed here since at least 1790.

Mustangs are descendants of Spanish, or Iberian, horses that were brought to the Americas by Spanish explorers in the 16th century. The name was derived from the Spanish word mustengo, which means “ownerless beast”.  Once escaped, these horses evolved without the influence of man and through survival of the fittest, evolved into the incredibly durable and tough breed we know today. The word Mustang or Wild Horse is used interchangeably.

Tracing the Salt River wild horses back, historic records indicate that in 1687 Missionary Father Eusebio Keno journeyed to Southern Arizona (then Sonora) Due to his efforts, missions and stockyards were developed, he reportedly left hundreds of horses and cattle at each mission. His many expeditions on horseback covered over 50,000 square miles. He had 6 succesful missions in Arizona including in Phoenix. Father Kino remained in southern Arizona until his death in 1711. (source; Architect of the Capitol, Washington D.C.).

By the 1800’s all over the western planes, the herds had grown and it was reported by many settlers and explorers (Meriwether Lewis and Clark, George Catlin, Rosa Bonheur) who described that there were large herds of wild horses roaming the planes, together with the bison.

Sadly, very similar to the story of the bison, the mass extermination started around 1850. Wild horses were considered competition for cattle (much like today) and useless beasts. They were shot, poisoned and killed. The Forest Service and ranchers organized roundups to shoot the animals. In 1908  the Forest Service put out a standing order on its domain, to kill every wild horse on site in Lander County.

Locally, according to this newspaper article, titled: “Phoenix Concern Eliminating Wild Horses From State”, dated 1927,  there were “a half a million wild horses on Arizona Ranges”, assuring an unlimited supply for the operations of the Arizona Reduction works, a horse slaughter house. The majestic animals were considered “worthless” and were rounded up and slaughtered by the thousands in Phoenix.

The Salt River wild horses likely escaped the killings by hiding in the thick vegetation along the river banks.

Today, it is estimated by the BLM, that we have less than 500 wild horses left in the entire State of Arizona. This includes the Heber wild horse Territory and two BLM Herd Management Area’s (Bureau of Land Management) of the Cerbat Mountains and Yuma.

The claim by the United States Forest Service (USFS), that the Salt River horses are not “wild” but let loose by ranchers instead, is based on a 1974 letter that acknowledged “dense riparian vegetation … makes it very difficult to … even observe these animals.” (simply put; they went out looking for horses once and didn’t find any) They based their entire decision to deny the wild horses protection under the Act on one outing.  That decision ran counter to the longstanding FS policy to manage these horses as “wild” and distinct from stray livestock all the years prior to 1971.

In fact, then US Forest Service Regional Rangeland Ecosystem Specialist Mr. Curtis M. Johnson, who worked at the Mesa Ranger District, states that the horses “… were not considered unauthorized use, they were considered wild horses” and managed as such throughout the 1960s under the Multiple Use Sustained Yield Act of 1960.

Click here to see the Youtube video of Mr. Curtis Johnson, who had a long career working for the US Forest Service for 42 years. In the video he testifies and explains how the Salt River wild horses we 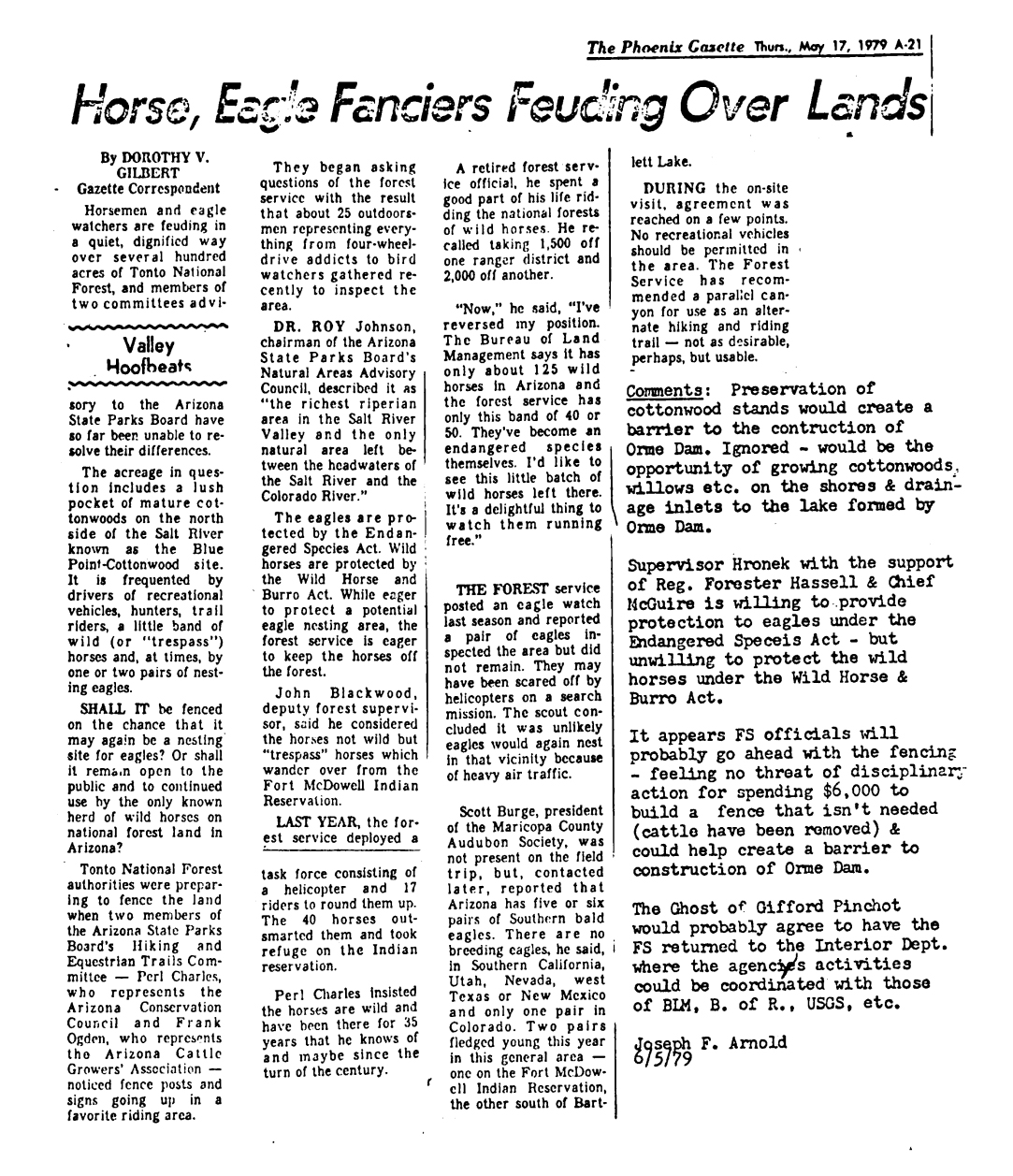 So while the horses were considered native in 1890 and managed under the Multiple Use Sustained Yield Act before 1971, they were deemed Indian horses, stray livestock and Feral after 1971.  It seems that the Forest Service either  forgot history or simply made a very big oversight in 1971, when they were mandated by the Wild Free Roaming Horse and Burro Act, to count and protect wild horses and establish a wild horse territory.

While looking further into US Forest Service documents we found that they themselves acknowledged the existence of the wild horses since 1930.  Further more we found this document from May 17, 1979, Phoenix Gazette. It proves several of our hypothesis. Mr. Perl Charles, a former Forest Service official and noted conservationist (for whom many hiking trails are named still) confirmed that the horses were wild and had been present on the Salt River; “ maybe since the turn of the century.” he said.  Mr. Charles was advocating for protection of the population of the estimated 40 to 50 wild horses on Forest Service lands, stating, “It’s a delightful thing to watch them running free.”

During his career with the local Forest Service, Mr. Perl Charles estimates he rounded up and removed more than 3,500 head of wild horses within the national forests. Therefore, Mr. Perl Charles should be a credible authority on identifying wild horses, versus the alleged “branded” Indian horses present at the time.

The article also stated that John Blackwood, deputy forest supervisor considered the horses tresspass from the frt McDowell Indian reservation. But one paragraph later confirms that the Forest Service deployed a helicopter and 17 riders to try to round then horses up. The horses escaped and not one was caught. The fact that they attempted a roundup proves that they were on Forest Service Lands and that they were aware of that fact. This document also stated that the Forest Service is eager to protect eagles but eager to keep wild horses off the land.

Simply put, the USFS claim that these horses are stray livestock is not supported by historical or current evidence and some foul play on the part of Forest Service management in 1971 is evidenced by these documents.

No parties  — including neighboring tribes or the State of Arizona — claimed these horses in response to the July 31, 2015, USFS-published  “notice to impound.” Therefore, it may be considered confirmed that they are not truly feral or stray livestock.

After all these years the wild horses remain; they have maintained their own freedom by hiding in the trees and escaping from helicopters and riders. Today we feel lucky that through these circumstances we still have a piece of living history left in Arizona.

Update: A bill passed and signed by Governor Doug Ducey in 2016 classifies the horses as “not stray livestock”.

Still there will always be a person or two that claims  that the Salt River wild horses are “feral”. While this derogatory term seems to be popular with anti wild horse people and the word itself a gateway to justify their removal, we should point out that it is actually not a scientific term. It merely describes the relationship between people and animals and since not one horse on the Salt River has ever seen the inside of a barn and every horse abandoned on the Salt River in the past 20 years, has either died or has been rescued,  the term “feral” on the Salt River only applies to the abandoned cat that lives at Granite Reef Parking lot. 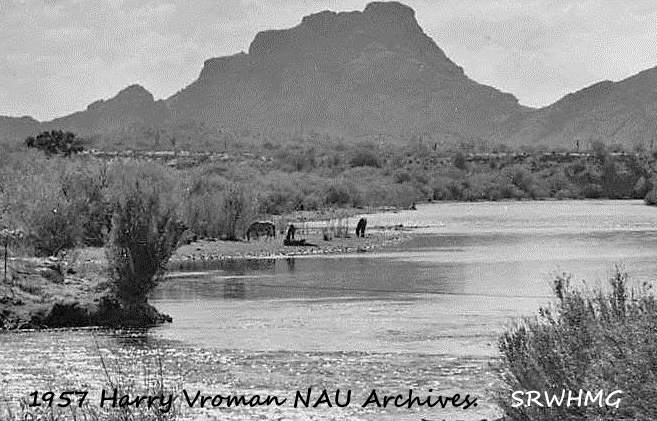 Our history is their history. This is a picture of  wild horses on Forest Service lands in the exact same spot where they hang out today, it was taken 1956 and published in 1957 by Arizona Highways.