Nature can be cruel, but also has its reasons.

Homepage UPDATES Nature can be cruel, but also has its reasons.
UPDATES

Nature can be cruel, but also has its reasons.

We considered not posting this, but we trust our audience to understand even the sad aspects of wild horse management.

Last night, one of Mick’s mares aborted a pre-term foal. This is the mare we were monitoring because she sustained a small puncture wound two weeks ago from a stick, and the wound became infected. We believe its the infection that caused the abortion.

Mick’s band is the band that was hiding in the coves all last year, so it is the only band where none of the mares received fertility control PZP, simply because they were in-accessible to our darting teams.

These types of incidents are sad, but they are perfectly natural. Her body was protecting her own health by expelling the foal. One extra benefit of PZP is that along with live foals, abortions and other sad natural foal deaths are prevented also.

Mares who abort or have a dead foal are known to go into grieving for a while and she may lose some weight. We are going to keep an extra eye on her and make sure that she gets some extra feed at the feed station.

Thank you volunteers Mel and Mike for handling this situation last night, thank you to Tina W, who alerted us, and thank you Rick as well as our AZDA AG Liaison Makenzie for checking on her this morning.

Managing them humanely for the public and by the public, SRWHMG. 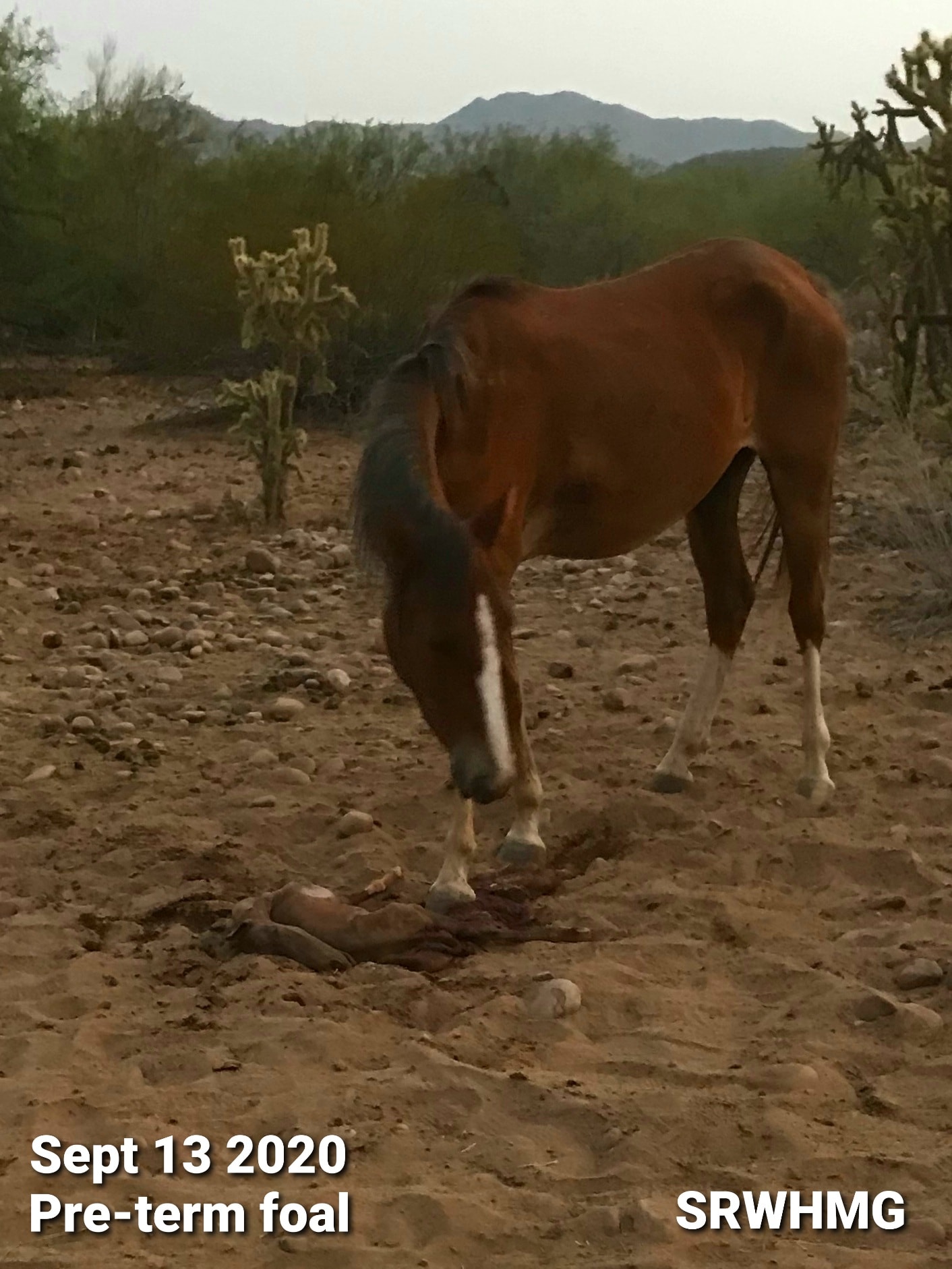 Previous Story
Awful! Another wild horse in a cattleguard!
Next Story
Sage anyone? 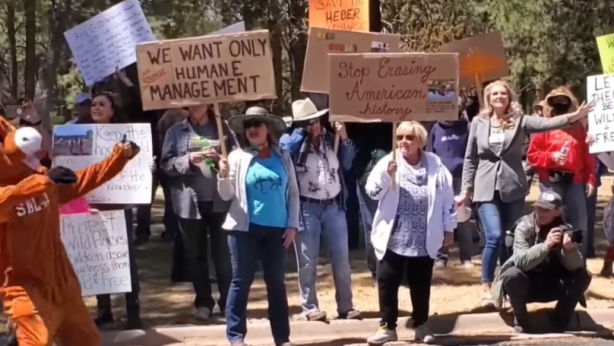 The Heber wild horses are in grave danger!! 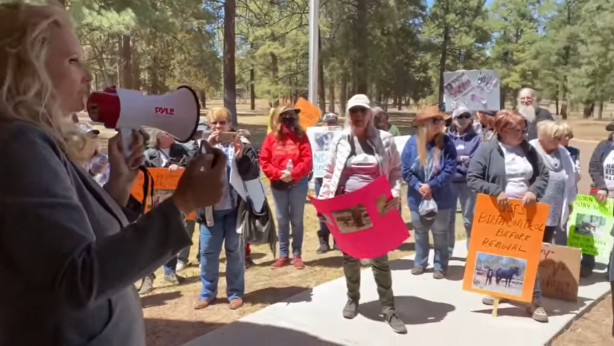 Happy Mother's Day to everyone. Watch how the others are watching Bubbles run around, so cute.

Happy Mother's Day to all the moms out there. Bubbles is just the cutest, but yes mom has here hooves full. LOL

Looks like mom has her hooves full. Bubbles has the zoomies.

She is adorable! Such a good Mama!

Send a thought, a prayer and a little message to 4x4 Joe! He is a genuine great guy who has helped us out several times, organizes the yearly 4x4 fourpeaks cleanup, and he loves the Salt River wild horses. He is in the ICU with Covid, and we want him to know the community is thinking about him! Hang in there Joe, be as tough as a wild horse, they never ever give up!
Please click on his page first (below) and then give him your best wishes, and a good joke or two might also cheer him up. Get better 4x4 Joe!!
SRWHMG. ... See MoreSee Less

Prayers for your recovery! God will bless you for your kind heart and dedication to the Salties!

Get Well Joe the horses need you🙃🐎

Wishing you a quick recovery.

Sending prayers for healing and a quick recovery Joe.

Keep fighting, the horses miss you.

Take care of yourself. Hope to see you and your truck on the river soon. 🙏🏻🤞🐎

Get better, Joe!!! The horses survived strangles you can beat Covid!!!

Wishing you a fast recovery. Take plenty time to heal so you can visit with your beautiful horses.

Prayers for a quick recovery for Joe 🙏🏻 🙏🏻

Get well soon. Run 4×4 over it and thank you for all that you do!

Take care Joe, praying for a swift recovery and for God to give you the strength to keep fighting and the comfort of His love. Thank you for everything you’ve done to help the horses.

you can beat it !!! The man upstairs will watch over you , keep you safe as he does all !!

Wishing a full and speedy recovery !

Wishing you a speedy recovery Joe! You got this!

Hope you're feeling better soon Joe!! Thank you for all you do for the horses and others.

Thinking of you and wishing you the rest you need to feel better soon. Praying for you and those caring for you.

Joseph M. Osuch we love you and we are praying for you. YOU CAN DO THIS Joseph M. Osuch, you are an Arizona LEGEND! You have done SO much for our community. Rest and get better, if only for YOU. I will DM you for more.

Get well quick...we ALL need you back...most of all your horses!

Sending you prayers Joe for strength and a speedy recovery! 🙏🏻

We are all sending many prayers and positive thoughts your way!

We know you will love this video, we saved it just for Mother's Day. This is Bubbles in her first few days, when we were monitoring her safety. (Bubbles is still the only foal on the Salt River)

During those early days, horse moms literally are teaching their babies to stay close to them. This is just adorable, but it is also risky in a forest full of bachelor stallions, so the mare has no choice but to run after her fragile newborn, out of love and concern.

It is not that different from human mothers, run after your kids, protect them from harm, teach them patiently, even while they are a little stubborn, and give them lots of love.

Thank you and Happy Mothers Day to all the beautiful mothers, of all species..

Sometimes Mom's have trouble keeping their kids in line.

Beautiful going to keep mum on her toes. Love it.

They really need to get the fallen branches cleaned up before...one of them breaks a leg...

Why don’t you separate the mom and her foal from the stallions until it’s older?

Question: will the bachelor stallions see him as a threat and kill him ?

I love how Mom goes after her. What a wonderful Mom!!!

That was wonderful! Thanks so much for sharing! Loved it! 💘

So stinking cute♡ Thank you for sharing.. and happy momma's day to all you amazing momma's out there.

Thanks for sharing happy mothers day to all💞🐎

Kinda sad she doesn't have anyone her age to play with

Watching over her baby... I absolutely love everything about horses!!!! GOD put everything wonderful and beautiful into the HORSE ❤️❤️❤️❤️

Happy Mother’s Day to all of you who care and love these beautiful horses. That little foal is really growing into those legs! ❤️

What a beautiful mother and babe. You know, from my vantage point, a lot of animals are better mothers than some humans. Least mine. I love and respect them so much for that <3

Thank you for sharing and Happy Mother's Day to all the moms including the mares. 💖 Love watching Bubbles 💖🌿🌹

Bubbles is adorable! Happy Mother's Day to y'all! Thank you SRWHMG! ❤️🐎🐎🐎

This is beautiful! Really touches my heart! Horses are looking great, mom is doing great and gorgeous!! Bubbles is already a beauty and full of life and energy as should be!!! Thanks for sharing, this I s wonderful!

Thanks for shingles this beauty and you have a special Mother’s Day ❤️!

Thank you for this! How absolutely adorable!

Load more
SearchPostsLoginCart
The Heber wild horses are in grave danger!!
Awesome rallying day here in Heber Arizona!
Stand against the EA of the Apache Sitgreaves National Forest!
Our one and only 2021 foal (So far)
This is an AP article about the Heber wild horse plan that we wholeheartedly oppose.
Join us in some action for the Heber Wild horses!