Phoenix, AZ (September 13, 2016).… The Salt River Wild Horse Management Group (SRWHMG) will hold a rally and press conference on Thursday, September 15th at a meeting of a Bureau of Land Management regional advisory board for Arizona, to call for humane and sustainable wild horse and burro management. The group will decry a recommendation by a national BLM advisory board to kill up to 45,000 captured wild horses and call for reform of the BLM Wild Horse and Burro Program, which they say is “spiraling” out of control.

What: Press Conference and rally ( right before the public comment period at BLM Arizona Resource Advisory Council (RAC) Meeting
Where: In front of the BLM office at One North Central, Phoenix, AZ
When: September 15th from 12:30 pm – 2:00 pm
Who: Simone Netherlands, President of the Salt River Wild Horse Management Group
and Amanda Marsh, widow of Eric Marsh superintendent of the Granite Mountain Hotshots

The RAC meeting will take place on Wednesday Sept 14th and Thursday Sept 15th, with a public comment period following the press conference and rally at 2:30 pm on Thursday. The SRWHMG will be attending the entire meeting, and representatives of the group and the national American Wild Horse Preservation Campaign will speak during the public comment period. They will also present a petition signed by over 6,000 citizens calling for humane burro management in Arizona.

The recommendation to kill up to 45,000 wild horses and burros confined to BLM holding facilities following their roundup and removal from the range was made on Friday September 9, 2016 at a meeting of the national Wild Horse and Burro Advisory Board in Elko, Nevada.

“Even though at this point it is a recommendation, we want to send a strong message to the BLM that any consideration of this cowardly ‘solution’ to a problem the agency itself created, will not be tolerated by the public,” says Simone Netherlands who is the president of the large group of hard working volunteers. “Healthy horses do not need to be ‘euthanized’ and there is no humane way to kill 45,000 wild horses and burros. So what the BLM is, in fact, talking about is the mass killing of almost 45,000 cherished mustangs… the slaughter of our American icons and the murder of our American spirit!”

On the same day as the advisory board made the lethal recommendation, the BLM itself dropped its plan for the risky and barbaric ovariectomy trials that had also garnered much opposition from the public. The BLM said it was dropping the experiments in response to a lawsuit filed by AWHPC and The Cloud Foundation.

“While cancellation of the sterilization experiments is a major victory, Americans will not stand by and allow the killing of tens of thousands of wild horses holding facilities,” said Suzanne Roy, AWHPC Executive Director. “If the agency thought the public was opposed to sterilization, wait until it sees what happens in response to the proposed mass killing of these American icons.

According to both the local SRWHMG and the national AWHPC, the BLM and U.S. Forest Service have been managing wild horses and burros the wrong way, for a very long time. The lack of personnel for up close management on the range, the failure to use humane birth control (PZP), the favoring of cattle grazing combined with the cruel roundup and stockpiling of wild horses in holding facilities, has caused the very problems the agency claims it now cannot solve. The frequent roundups, according to an NAS study, actually fuel high reproductive rates on the range. In addition, the BLM keeps many herds at population levels to small to be genetically viable, causing inbreeding.

At the press conference and during public comments, the organizations will also have some praise for local Arizona BLM officials, including the Kingman field office, which will be implementing a field trial of humane birth control PZP for the Oatman wild burros, who hail from the Black Mountain Herd Management Area in western Arizona.

“There is only one way to manage wild horses and burros responsibly and that is through up close documentation and humane management on the range with the responsible use of PZP birth control where needed,” Netherlands said. “Arizona, the state with the smallest number of wild horses and largest number of wild burros in the nation, has an opportunity to take the lead in implementing humane, on the range management.”

“We hope to continue to work with both the BLM and the Forest Service towards humane and scientific solutions,” concluded Simone Netherlands. “The public demands humane management of our wild horses and burros, and the agencies are eventually going to have to deliver on that goal.”

Please arrive early as parking may be challenging, there is a parking garage at one north central, or meter parking on the street.

The Salt River Wild Horse Management Group is an Arizona non-profit organization established to protect, monitor and scientifically study the Salt River Wild Horses. The SRWHMG has been spearheading the effort to secure lasting protections for this iconic and beloved wild horse herd in the Tonto National Forest.

The American Wild Horse Preservation Campaign (AWHPC) is dedicated to defending America’s wild horses and burros to protect their freedom, preserve their habitat, and promote humane standards of treatment. AWHPC’s mission is endorsed by a coalition of more than 60 horse advocacy, public interest, and conservation organizations. 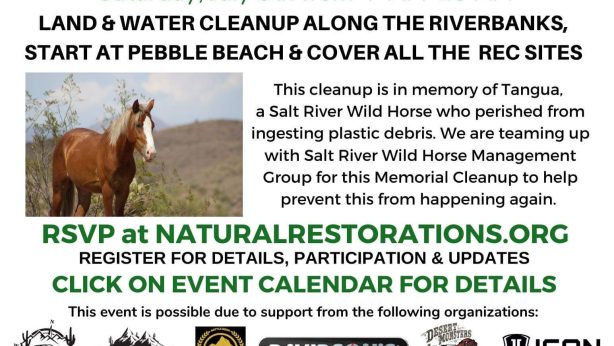 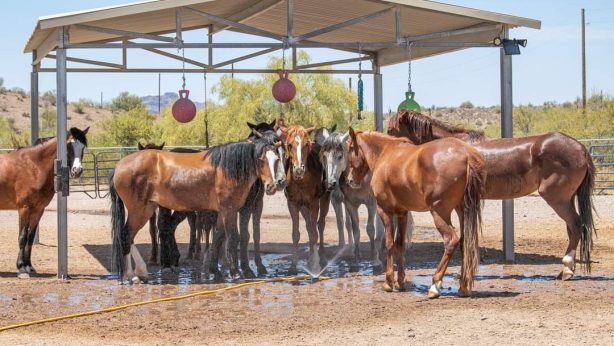