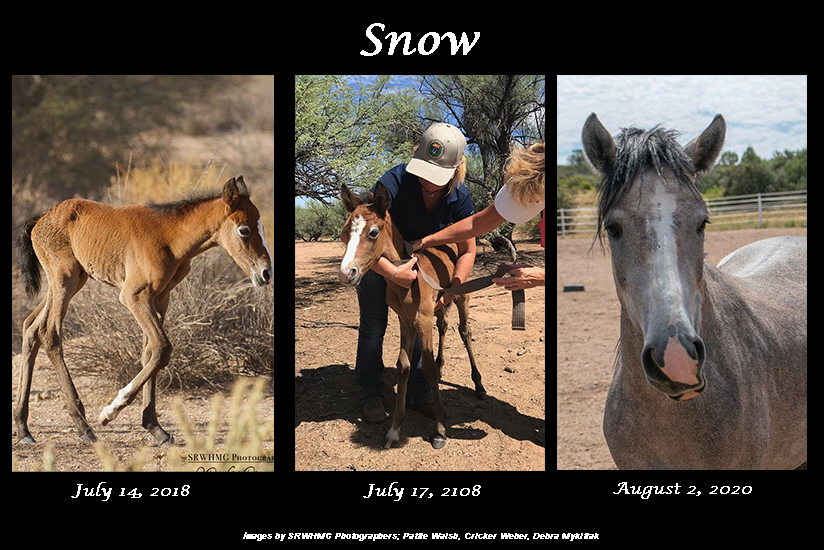 Snow was orphaned in the wild at two weeks old. His beautiful mom Snow White died of mesquite colic in July 2018. We then searched for Snow and found him the following day. His band led by two powerful stallions were always protecting him and kept him in their midst. It was heartwarming to see, but we knew that he would slowly perish without his mother’s milk. With permission from the AZDA to rescue him, we were able to nab him from the stallions to save his life. Snow was as tough as he could, but acidosis combined with anemia (mesquite bean poisoning) needed initial fluids and plasma treatments then special feedings every hour around the clock for weeks.
Now 2 years old and loving life together with his best buddy Gideon, at our facility in Prescott. They have a lot of fun playing together and worth every dollar and every sleepless night.

We want to thank all of Snow’s sponsors who made it possible, but we also need your continued support.

Finally the Auction update. (sorry for delay we are a little overwhelmed with phonecalls and logistics right now) 1. Who was at the auction? Short story, there was no one interested in the Alpine wild horses. We have many contacts across the country and we' ve tried very hard. The rescue market is simply oversaturated. No large sanctuaries to give them something close to the beautiful forest they came out of, and no individuals who felt like putting in the time to train a wild horse. With the exception of Alpine Wild Horse Advocates Joe and Dyan who got the most beautiful young filly. (thank you to them, because they did it out of the goodness of their hearts.) There were also some interested horse advocates who were there to see what this auction was like and we appreciate everyone who came. And then there was a gentleman we are going to call Mr. Suspect for now, he placed his 125 dollar bids on 7 of the wild stallions and then left. 2. Who was not there: While at least 2 rescues kindof made a back up deal to take leftover horses for free, there were no rescues there to ensure these already unlucky horses didn't end up in the worst case scenario, except for us. What was no surprise is that none of our pottymouth haters were there either, who state every day that we are terrible people and they can do things so much better. (FYI people who've never rescued a horse in their lives) 3. The Forest Service: The ASFS and the capture contractor did put measures into place to try discourage killbuyers, they did that, and we take that as a sign of goodwill, be it the only one. They did not let semitrailers enter the property and they took everyone's address who was bidding. It was a bit discerning how they also seemed to think something very scary was going to happen at the auction, because there was enough law enforcement that they could have handled a Waco type situation, easily. 4. The crux: Unfortunately, the thing is that transporting horses to Mexico for slaughter is perfectly legal. And you do not know who's a good guy or a bad guy and no one can control that, because a public auction is a public auction. 5. The result, here are the totals: It was an open paper bid. We are bidder number 7, Mr. suspect was bidder nr 1. -We won 3 out of his 7 bids even while we do not have room for these guys. Unfortunately he still ended ended up with 4. -2 horses did not get bid on, but we knew they would end up alright, more about that later. -One of our volunteers Glenn got 1 friendly bachelor. -Alpine Wild Horse Advocates Joe and Dyan got the beautiful light filly, and -10 of them became property of the Salt River Wild Horse Management Group. -Out of those 10, we are giving 2 or 3 of them back to the capture contractor, who coincidently is our former Salt River Ag Liaison. We have an interesting history, but some fences are easily mended for the sake of the horses. She also ended up with the 2 stallions no one bid on. Wild horses can become great riding companions if trained with patience, and that's what she is going to do with them and keep them herself, so thank you Jackie. -then we also got a pretty girlfriend for Batman and a pretty girlfriend for Shadowfax, who just arrived at our facility on the Beeline! They will get pzp so that we don't have to geld the old guys. -Then the happy ending we wanted so badly almost happened. But the angels wouldn't have it. We got the beautiful buckskin lead stallion who was rumored to be dangerous, and we bought his mares and offspring. No one bid against us. Once all bids were confirmed and we paid $1225 for all, we watched the sorting and loading. The bad news, please be prepared: The beautiful dark lead mare, the mother of the little colt with her yearling still by her side too, suddenly took a run at the paneling, bashed her head and went down. Everyone was stunned, including Forest Supervisor Judy Palmer who came over right away. We watched horrified as her breathing stopped shortly there after. She had broken her neck.We are not going to say it was anyone's fault, except for the fact that she should have been left in the wild. These are the kind of things wild horses do when they want to protect their family. It was a brave attempt at escape on her part. Rest in peace brave Alpine wild mare with no name yet. We will take good care of your precious family. They will miss you. With much love and heartache for the Alpine wild horses, SRWHMG. ... See MoreSee Less

It was a very long, exhausting and also heartbreaking day today bidding on Alpine wild horses, who were taken from their beautiful home in the Apache Forest. Please forgive us but we just got done and there is no time for an official update. Tomorrow we will tell you exactly how we ended up with a lot of Alpine wild horses, which is the good news, but there's also really bad news. In the mean time listen to all the communication between our rescued Salt River wild horses and these adorable Alpine new arrivals and the lead stallion that is about to join at least part of his band again. Please stay tuned SRWHMG. ... See MoreSee Less

Woohooo for the rain, comon grasses! We are praying to be able to end our feedprogram entirely! These pictures are of Scout's band battling for a home territory along the river. They are originally a Butcher Jones band and they are trying not to get kicked out of other stallions home territories. If the rains keep coming like it promises, there will be enough forage in their habitat again and there will be less competition. We want to thank all of the photographers who respect the horses and post their pictures on our advocates page so that the public can see their daily lives. (Go to: Salt River Wild Horses - Advocates) Pics by Damien BustamanteSRWHMG ... See MoreSee Less