We get this question a lot. How long do wild horses live?

Homepage UPDATES We get this question a lot. How long do wild horses live?
UPDATES

We get this question a lot. How long do wild horses live?

We get this question a lot. How long do wild horses live? So this is a post to honor one of our oldies, Maverick, and tell the story of his life.

No worries, Maverick is not dead yet, he is 22 years old and he is what we call a “retired” lead stallion now. On the left is what he looks like today and on the right is him in his younger years. His face and particularly his ears, show that life in the wild has been no walk in the park.
The role of lead stallion in the wild is a straight up heroic job, and we think these amazing studs are highly under appreciated.

We think it is so heartbreaking that, when they end up at an auction or adoption, these are the souls that no one wants.

When u watch a band in the wild closely, even while it seems they might all be grazing, it is the lead stallion who will be watching you. Not a minute goes by without him keeping a watchful eye over his band. It is a full time job without weekends off, and there are no vacation days. If he snoozes, he looses.

Maverick’s life was dedicated to his family without self-preservation. At a moment’s notice he was ready to gather his band and flee, or face off with any stallion who challenged him. Even when all seemed peaceful, he still knew where each horse in his band was, and if one of his offspring was moving away too far, he went to get him/her, all while making sure the rest of his band stayed put, until he came back.

If a mare got too close to a bachelor stallion, he would position his body in between her and the opponent, and would give fair warning to any who are thinking about stealing one of his mares. He defended not only his band, but also his home territory. Each band has a definate preference over an area where they like to roam best.

He knows every rock, every tree and every animal in his area; he even knows all of the other lead stallions and their bands. He knows what time of day it is and he knows every season and when to migrate. He knows where to cross the river the safest, how to stop a foal from drowning, and he knows how to wait out a storm.

He also knows how to let his lead mare lead and he always supported her. He stood over them while they slept and nuzzled them for encouragement and affection.

He lovingly raised and defended his offspring until they were about 2 years old. Around that time he sends his sons on their own merry way, and lets his daughters leave whenever they are ready. With this he made sure his bloodline is continued without inbreeding. All of this is typical behavior of any lead stallion of any band in any herd in any part of America.

Maverick has been a lead stallion for approximately 15 years and in our experience this is average. Stallions start to conquer their first mares successfully, between 6 and 8 years old and seem to retire between 18 and 21 years of age.

Around that age, there comes a day when it becomes too hard, a day when they can’t do it anymore and they loose their last battle to a younger stronger stallion. It’s a sad day for us to witness, but it’s the way of the wild; the young stallions bring new blood and they deserve a chance too. But it’s rarely the end for the old stallion, he’s not dead yet.

At first they seem defeated, but after a few weeks, these stallions seem to become quite content and almost lazy. You won’t see them try to fight for mares anymore. We compare it to grandpa’s, who’ve been there done that, that’s how they act. We’ve seen them greet some of their offspring randomly, but then move off on their own again. They migrate much less and may hang out with some young bachelors for periods of time, but seem perfectly content in not having to do the job of lead stallion anymore. That’s why we call them “retired”.

Their lives have not been easy, but they have been full. They lived with courage, determination and loving devotion.

See if you can find some of these retirees. We love them and are proud that on the Salt River, they can live out their entire lives free. Our hearts break for all of the lead stallions across the country that are not so lucky, because we know that they are all just as beautiful as Maverick.
Humane management on the range is possible. Our birth control program has 100% efficacy, which keeps the Salt River wild horses 100% free.

Enjoy your retirement on the Salt River Maverick. Sincerely, SRWHMG. 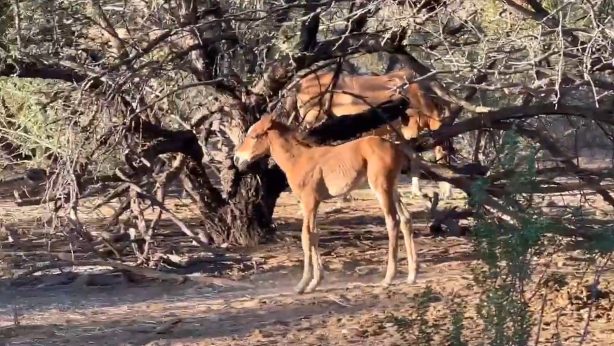 [vc_row][vc_column][vc_column_text] September 23rd With your public input it was a... 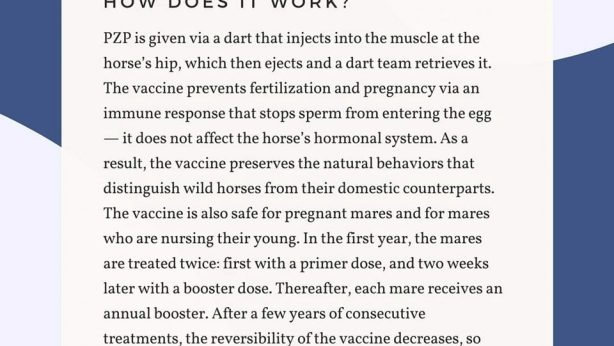 An adorable video for foal Friday of.....Mirabelle! With your public input it was a very close tie between Moana and Mirabelle. Thank you to all who voted! Please remember to respect their space by staying 50 ft from them at all times. Video by SRWHMG Karen Carney taken with zoom so not to disturb the band. Have a great weekend! SRWHMG. ... See MoreSee Less

On this first day of fall, we want to make sure that people don't "fall" for some of the misinformation about PZP fertility control for wild horses. We chose to use it, because it is the safest form of birth control for wild horses, and their natural behavior is of most importance to us. We are against most other forms of birth control for wild horses such as ovariectomies, geldings or chemical vasectomies, because A. It influences their hormones and therefore alters their wild behavior and B. is not reversible. PZP has over 30 years of research behind it and we are having amazing results with our program. (One foal for 2022, versus 109 foals in 2019) We also can report that we have seen literally no negative side effects, except for an abscess here and there, which always resolve quickly. (About 4 % of all dartings have developed an abscess) All bands are holding their hierarchy just like previous years and mares are just as loyal to their stallions and vice versa. Battling occurs with bachelor stallions and wild behavior continues just like it was in 20 previous recorded years. What's also very important is that it is safe for pregnant mares, and nursing foals, which we proved with a healthy 2019 foal crop, of which all mothers had been treated prior to giving birth. Most importantly, our PZP program is proving the point that we've been making for decades: There are better ways of managing wild horses and wild horse roundups should be absolete. The alternative for the Salt River wild horses was removal, likewise herds that are not managed, have been growing and are facing needless cruel never ending cycles of removals. PZP is THE responsible alternative to removals, especially when there is only a limited habitat like at the Salt River. Since 2018, we have prevented the birth of more than 300 Salt River wild horses, who otherwise would have faced a terrible fate. We could not be prouder that our program is seeing a 99% effacacy. At this time the herd population is right around 400 Salt River wild horses. It is our goal for every Salt River wild horse born in the wild, to live it's whole life peacefully in the wild. It is also our goal to keep the herd viable and sustainable so that they can be enjoyed and loved by the public for ever and ever. The misinformation about PZP includes made up ridiculous facts like that it is a pesticide and that it causes still births etc. Don't fall for it. We hope that with our real life documentation and our thousands of eye witnesses to a very happy and healthy Salt River herd, it will squash all misinformation out there. Thank you for your support. SRWHMG. ... See MoreSee Less

Alpine wild horses rescued, it's so nice to see them back at grazing peacefully. Goodnight everyone. SRWHMG. ... See MoreSee Less

SearchPostsLoginCart
An adorable video for foal Friday of…..Mirabelle!
Don’t fall for misinformation about PZP fertility control for wild horses.
[Video] Alpine wild horses rescued and grazing peacefully
Thank you to everyone who kept her a safe secret!
Show support and eat good food with this nationwide Panda Express fundraiser!
Our real nightmare. – In memory of Belle