Homepage IN THE NEWS Deaths of Salt River horses along Bush Highway lead to new safety measures
IN THE NEWS, UPDATES

Five fatalities of horses being hit by cars since April along Bush Highway, three of them within the past week, have prompted new safety measures to warn drivers.

Several message boards were placed along the highway, cautioning drivers to “slow down” and to “watch for horses,” according to Tracy Ruth, communications-division manager for the Maricopa County Department of Transportation.

Other commitments include working with the Maricopa County Sheriff’s Office to enforce speed limits and painting “watch for horses” signs on the asphalt.

“We really want to commend them for their fast action,” she said.

Netherlands said the increase in fatalities may have resulted from the recent addition of guardrails along portions of Bush Highway.

“The horses were getting confused by the guardrails, they kept walking into them,” she said, and were stuck within the confines of the road at times.

Since April, five horses have been killed. Two of the horses had unborn foals. No people have been seriously hurt in the collisions, according to the non-profit group.

Ruth said the county’s Transportation Department has worked with the non-profit group for nearly five years, but immediate action was necessary because “it had become a significant issue.”

Ruth said some of the long-term safety measures may be completed within the next year. These include installing speed “flashback” signs to remind drivers when they exceed speed limits and placing horse-crossing signs.

The county also will work on developing long-term solutions, including radar-triggered flashing lights that are activated when horses are on the road.

Bush Highway cuts across the habitat for the Salt River horses, a herd that has long been the subject of advocacy and debate.

In August 2015, the U.S. Forest Service announced it would round up and remove the herd of about 100 horses that roam near the Salt River Recreation Area. The Forest Service said the horses were causing safety issues, including traffic collisions on the Bush and Beeline highways.

An outcry from animal lovers and politicians halted the planned roundups, and an agreement to protect the free-roaming horses was announced in December 2017.

Under the agreement, the horses are no longer considered stray wildlife and the law makes it illegal to slaughter, harass, shoot, injure or kill the horses. 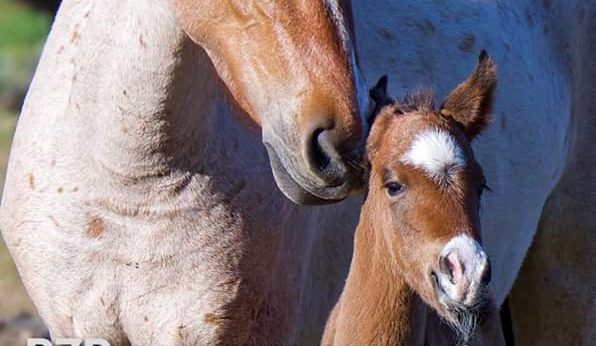 [vc_row][vc_column][vc_column_text] Holding our horses. The Salt River wild horses are... 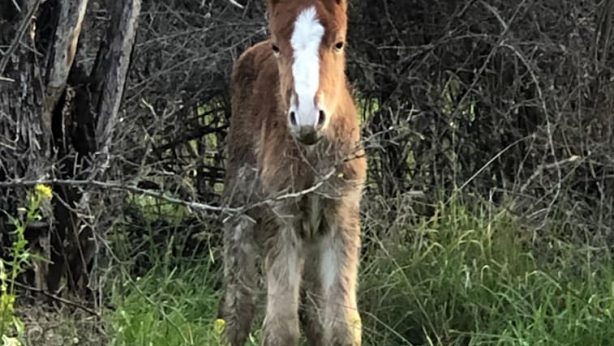 [vc_row][vc_column][vc_column_text] Born free. How's this for an amazing Valentine's day... 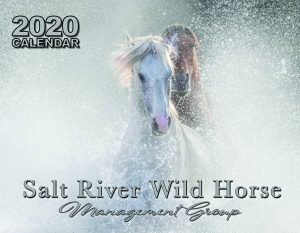 This message is only visible to admins:
Problem displaying Facebook posts. Backup cache in use.

Come on out today and tomorrow to Nordstrom Rack at Tempe Marketplace for your holiday gift wrapping for a donation to benifit SRWHMG! Our elves are great wrappers!!!
Saturday 12/21/19 9am to 9pm
Sunday 12/22//19 10am to 7pm ... See MoreSee Less

What a great event..so much fun seeing all the bikers riding along Bush Hwy and the after party is a blast. Good food, great band and a worthy cause, SRWHMG.

FENCE POST 2.
Just some exhausted SRWHMG volunteers sitting on the fence after putting up barbless wire fencing on the south side of Bush Hwy!

To never see another horse get hit on Bush Hwy, THAT is all that we want for Christmas.

EXPLANATION: Because the Northside of Bush Hwy is now completely fenced by the Forest Service (FS), we have been working hard this holiday season, to secure our fenceline on the southside. (which is barbless wire.)

In this particular spot in the picture (at Bulldog), horses were able to jump the low metal bars, thats why we just installed this new barbless wire fencing. We will continue to work hard to maintain these 10 miles of barbless wire for the safety of the wild horses we all care about. (Plus the safety of drivers)

Because of the barbed wire fence and the changing of wild horse patterns, we have been talking to the FS about some highly needed improvements that we really could not live without.

Resulting Improvements:
>We agreed to purchase 6 emergency gates and the Forest Service (FS) agreed to install them, so that we can utilize them to let horses into the fence should there be a horse in the road emergency; >the Forest Service (FS) paid for paneling, that we then installed in order to stop horses from getting stuck on the wrong side of the fence at Coon Bluff corner; > The FS has raised the fences to 50 inches high instead of 42 inches, so that horses are not tempted to jump over; >The FS will now fence the road along Granite Reef, which has been needed for a long time, plus they will extend the fence at Water Users, which will prevent horses from walking past where the fencing ends;
>Also there are now entrances for people at favorite hiking and biking trails, (even at the Wild Horse Overlook).

We hope it is obvious to everyone that we will never like barbed wire, but we do want to thank the Forest Service (FS) sincerely for making most of the improvements to the new fence that we requested. We also want to thank AZDA for supporting SRWHMG in that. Perhaps you, our supporters can help us in putting a quick thank you comment under this post, to FS and AZDA, because it is important to give credit when it is due. (Plus we will have to work w them for a long time to come!)

Because all of these changes don't happen all in one day, you may have seen us lately along the road. We are having a heck of a time getting horses off the road and out of dangerous places, like by the canal on power road! We've been super busy, to say the least, walking horses back to where they are safe. So if you see our volunteers with yellow vests along the road, there is probably a horse, so PLEASE SLOW DOWN?

Can anyone imagine what it is like to be desperately warning traffic about a horse on the road, and then seeing the horse get hit anyway? It's happened to us, and it is worse than your worst nightmare.

We do think that the changes will make Bush Hwy completely horse and driver safe, especially once we get an overpass at the 3-way stop. We have been requesting the overpass, because we do not want the horses to loose an important part of their habitat! (We might need your help with that next.)

To never see another horse get hit on the highway, THAT is all we want for Christmas.

With that we want to thank our donators who make our important work possible. Approximately 10% of our yearly budget is spent on improving safety on Bush Hwy. The Forest Service just spent about a million dollars on the fencing, but we spent only 3% (30,000) of that and still get the job done. However, it is not easy coordinating and educating enough volunteers to do this, it takes a lot of people who work out of the goodness of their hearts, and it is not easy raising the funds for it, because it does not sound very exciting.

So if you'd like to support SRWHMG, you can do that with just a like or a share, but even more impactful, with a donation this Christmas season; it will go directly towards their safety! Please click here. Thank you!

Humanely managing wild horses FOR and BY the public, SRWHMG. ... See MoreSee Less

If you like our work, we really need your support. We cannot do it without funding and support. saltriverwildhorsemanagementgroup.org/donate/

Thank you to FS and AZDA for the work you've done to help keep the Salt River horses safe. Also many thanks to all of the staff and volunteers of SRWHMG. This is a great Christmas gift! 🥰💕💕🐎

Thank You AZDA & FS & SRWHMG & All The Amazing Volunteers Who Do So Much For The Wild Horses Safety As Well As For The Public !!❣🐴❣🐴❣

Thank you SRWHMG, the Forest Service and to AZDA!!!!! Thank you for helping and supporting Arizona's wild horses! 💕

Thank you FS and AZDA for working with SRWHMG to keep the horses and the public safe!! We appreciate you all!! ❤🌵🐎

Thank you SRWHMG for pushing for these changes and standing your ground. A huge thank you to the FS and AZDA for compromising and working with the group!! The safety of the horses (and drivers) depend on everyone working together!

Thank you FS and AZDA for working with the SRWHMG to improve on very important areas and details. Not a fan of the barbed wire and never will be due to the harm it causes to wildlife and humans. With that said thank you again for listening and acting.

Thank-you to the volunteers, AZDA and FS for all you have been doing to support SRWHMG and the horses!

Thanks to all for doing their best to keep the wild ones safe.

Forgot to say thank you to the Forest Service!

A heartfelt thank you to the FS and AZDA as well as our incredible SRWHMG volunteers for all of their the selfless hours of helping to protect our magnificent wild horses!! ❤️🐴❤️🌵

Thank you FS and AZDA and of course the SRWHMG's fabulous volunteers for their endless hard work to keep our herd safe.

Thank you all so much for all your hard work and dedication to keep our beautiful mustangs safe.

Thank you FS, AZDA and SRWHMG for making Bush highway safer. Thank you for compromising! AZDA, please reconsider the use of barbed wire. It is NOT safe.

Thank you Forest service and AZDA for listening and compromising with SRWHMG. Barbed wire is so cruel and inhumane. Merry Christmas!

Thank you for the vigilant work volunteers

Thank you everyone for getting together and looking out for humans and state treasures!!! So very grateful for all you have done - are doing and are set to do. We ❤️ you all! ❤️🐴🎄😇🌟

Thank you FS and AZDA for working with SRWHMG. Thanks to all the volunteers who have been working so hard.

Great work by all! Thank you Gs and AZDA for making the requested changes.

You are all heroes....thank you every day for love and understanding....and doing the work it takes.

We LOVE so many things about this post! Thank you FS and AZDA for working with and supporting this incredible group. Thank you VOLUNTEERS who make our hearts explode with gratitude at your unwavering dedication. Thank you leadership of SRWHMG for your integrity, focus and determination because we know you do it only for the horses while getting less sleep on a daily basis than Santa on Christmas Eve! ❌⭕️❌⭕️ 🎁🎄🐴

I too want to thank the FS and AZDA for all you have done to help keep our wonderful wild Salt River horse herd safe. Thank you again.❤️🐎🐴

Thank you Forest Service for helping make some improvements in the fencing. I don’t like the barbed wire but the gates will be great! Thanks!

Thank you all volunteers for keeping the horses safe. Merry Christmas

SearchPostsLoginCart
BREAKING: Fertility control is working!
Born free on Valentine’s Day
It’s been a long road on Bush Hwy.
2019 SRWHMG Herd Health Report
[ALERT] We are the target of a vicious defamation campaign.
An open letter to those who litter…