There’s a Salt River wild horse named Ducey and he is now a lead stallion! (Ducey is the horse on the left) 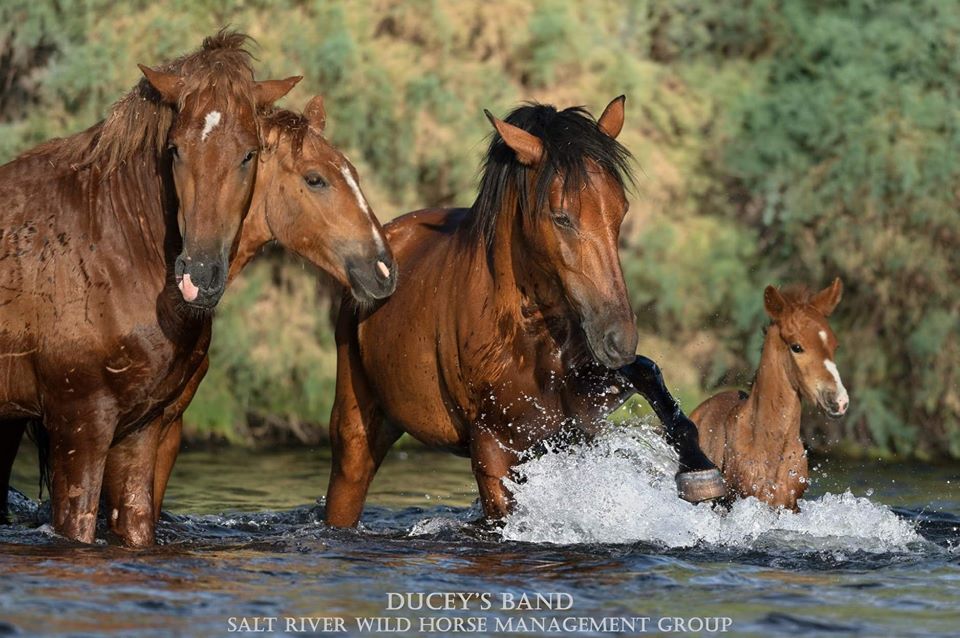 On February 3rd, 2017, the first foal of the year was named after Governor Doug Ducey, because of how much he has done, and still does, to preserve and protect this historic and recreational resource for Arizona.

We predicted that horse Ducey would emancipate (leave) his birthband at 1.5 years old -which he did- and that he would become a lead stallion around 4 to 5 yrs old, because that is the norm… but Ducey is only 3.5 yrs old and this is his little family band!

Ducey has become a lead stallion much sooner than is normal. He battled hard to conquer this mare Serena, her yearling (Sargent), and her newborn foal named Soldier. Neither the yearling nor Soldier are the biological offspring of Ducey, but Ducey treats them as his own and protects them with his life.

Ducey also has a lieutenant stallion named Sarge who is still in the picture- just not in this picture. He was just standing off to the side, like lieutenant stallions do. Sarge and Ducey together battled hard to protect this foal from intruding bachelors on the day of his birth. (See previous post for Soldier’s story)

Little Soldier is one of only 13 newborn foals this year. Compare this to last year when there were 85 foals by this time, that is a very low number of foals. So, it is especially cool that Ducey is with one of them.

The big difference in the number of foals is due to the success of the PZP birth control program. 100% of the mares who received the birth control in time did not get pregnant! Serena received hers just a tad bit too late, so she was already pregnant.

We are happy with these results because it stabilizes the population and over the next few years will reduce their numbers through natural attrition. This is so that there will never have to be a roundup of Salt River wild horses, which has been our goal all along. To learn more about how PZP is safe and effective please check out our website.

Ducey the stallion, not unlike his namesake, is a good, caring and compassionate leader.

Ducey the Governor -even while he is very busy- is currently evaluating the long term management plan for the Salt River wild horses. Please let the him know that you love being able to see horse Ducey, plus the rest of the Salt River herd, grow up wild and free.

Keeping them wild and free,
SRWHMG.

** The above image is a framed canvas that we are gifting to the governor. The amazing picture was taken by SRWHMG photographer Paul Martin.

Previous Story
Soldier on.
Next Story
The Goldfield Fire: Prelude 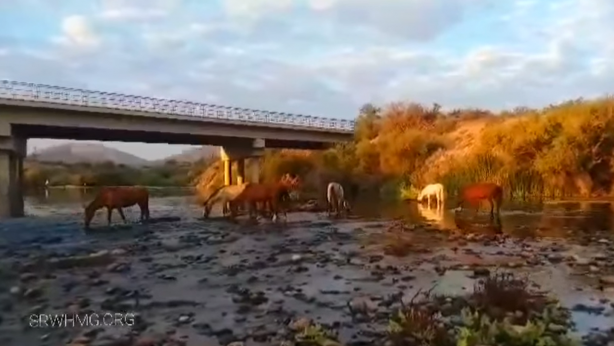 [vc_row][vc_column][vc_column_text] September 20th Just 20 minutes from the hussle and... 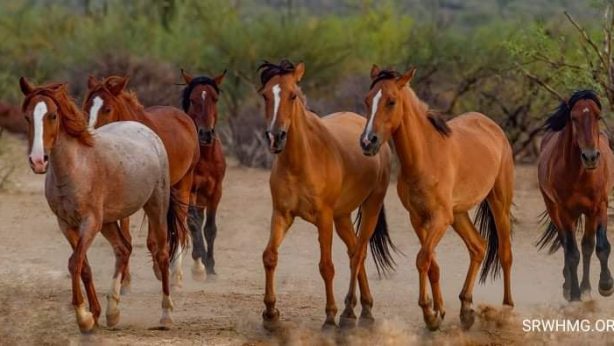 It's easy to "fall" in love with the Salt River wild horses! Happy first day of fall 2021 to our supporters! It is important to continue our mission of keeping them safe, healthy, wild and free, so please continue to support us. Click like on not just our posts, but on our page, and please invite all of your friends to like our page. Every like is a voice for the horses. This is Kayo's band who likes to escape out of left open gates. They are happily munching eelgrass today. Video by SRWHMG Karen Carney. For the public and by the public, SRWHMG. Please visit SRWHMG.ORG ... See MoreSee Less

Just 20 minutes from the hussle and bussle of the great metropolis, you can find a little piece of American history, living symbols of the pioneering spirit of the American West. They roam on almost 20,000 acres on, in, and along approx 14 miles of the lower Salt River. They have a right to live in this habitat through a novel collaboration between the Forest Service and the AZDA and a state contract of 1 dollar to the Salt River Wild Horse Management Group for taking care of any and all needs they have. SRWHMG is a non profit organization dedicated to their protection and humane management. The organisation depends entirely on donations from the public. Please enjoy and also respect the Salt River wild horses when you see them. (Maintain 50 ft minimum distance)This video was sent to us by a great supporter who likes to remain anonymous. If you have a great video of your Salt River wild horse encounters, do send them in a pm to us! Have a great week. SRWHMG. ... See MoreSee Less

Family matters.Wild horses roam together in family groups called bands (the word herd is sometimes used, but is incorrect) There is always at least one lead stallion and one lead mare to form a band, but there is no exact formula. Much like human families, we find that there is not one family exactly the same as another. This is what keeps herd dynamics so interesting. This beautiful young family band is a great example. On the Salt River it is not uncommon for bands to have more than one stallion, sometimes even three or four stallions, but there is always one stallion clearly the lead, and the others are called lieutenant stallions and second lieutenant stallions etc. Their roles are worked out over time through battling, and their hierarchy is eventually determined by age, strength and intelligence. This band seems a bit of an exception and it is sometimes hard to tell who is the real lead. If you look closely at this picture, you will notice two bay stallions who look almost identical and act almost identical as well. 🐴🐴You can see each one pushing their mares together in the same direction, as if they had previously discussed their plans. (They are doing this, not to be mean, but to keep them safe from other stallions). How are they so effortlessly and harmoniously working together?These two stallions, Stewart and Nirvana, are brothers, who since the day they were born, have never been seperated from eachother. They were born just one month apart in 2016, each out of a different mare, but in the same band with the same sire, Prince Ike. Under his watchful eye the brothers played together, learned together and grew up together. They eventually left their band together as well (emancipated) to later form one of their own. They have four mares and make a band of 6. At 5 years old they are quite young to have that kindof success. Just another band of horses you could say, but when you deepen your understanding of herd dynamics, you can see how extraordinary each family is. There is so much more than meets the eye. It seems that these strong bonds formed by loving intelligent animals, should never be broken by men. May they run together forever. SRWHMG.ORGThe Salt River Wild Horse Management Group (SRWHMG) is an accredited non profit organization dedicated to the protection and humane management of the Salt River wild horses. We document and record every birth death and detail of every Salt River wild horse. All information we share is the result of years of hard work by many volunteers and is proprietary information. So please share our posts and the information and names it contains, but please, give SRWHMG credit for it. Thank you. P.s. Stewart and Nirvana also have an older brother Jagger, who is also a succesful young lead stallion with a large band of his own. Prince Ike has contributed strong DNA to the Salt River herd and in spite of his age and now half blindness, he is still with his same loving mare of 15 years, Tina. She is both Jagger and Stewart's mother. ... See MoreSee Less

SearchPostsLoginCart
20 Minutes From Metropolis
Family matters.
How do we stay so cool?
A moment of silence..…
A foal grows up without the fear of helicopters
And just like that, a wild stallion becomes famous.