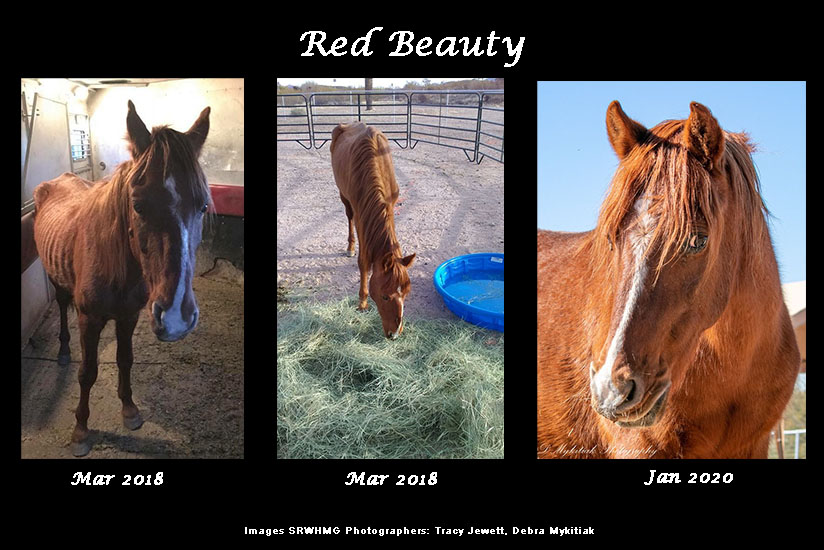 While we usually remain hopeful for recovery (since we see incredible healing take place in the wild), it was becoming clear that he was not going to survive this drought and that he was suffering. Red Beauty, reduced to only a shadow of his beautiful self, seemed to ask for help, and gave us the perfect opportunity to do so.

When we found him standing close to the road, we jumped into action. Mid morning Simone and just a few volunteers started the gentling process in the field, until approximately 40 SRWHMG volunteers gathered around 3.30 pm and we were ready to start the capture process. Our volunteers, having done this many times before, calmly started forming a human round pen around him at 4.00 pm. First very large, so he did not notice, then smaller and smaller until he realized he had nowhere to go. He searched for an opening and Simone called, “hold the line!”

Next we guided him calmly into the half round pen we had made out of the panels earlier. Once we had him on that side we quickly picked up the rest of the panels and built the round pen around him within 30 seconds and had him captured just before dusk. He was captured without any form of sedation in a non stressful way. Red Beauty is safe! He is currently acclimating and getting nutrition.

UPDATE: Red Beauty has gained a spectacular amount of weight and is very happy in his enclosure at the SRWHMG property. He recently found a friend in Old Lady who is right next to him recuperating.

The river is at 480 today, horses are still eating River eelgrass. A beautiful morning on the lower Salt River! ... See MoreSee Less

Sharing a past post to show how long we've been asking and advocating for the minimum 100CFS. We need you our supporters to keep up the ask. SRP claims to care about the environment in all of their advertising and this is the opportunity for them to prove it. Please keep writing. Thank you. Call:(602)236-4398Email: corporatesecretary@srpnet.com fb.watch/8Vd0gq-dM9/ ... See MoreSee Less

The river is still at 768 CFS today.Here is a picture of all the "other" amazing wild animals that depend on the Salt River and it's aquatic food supply. Our point being that the horses are not the only ones to suffer when SRP reduces the water to 8 CFS. This ecosystem is so beautiful. SRP could fairly easily accommodate the 100 CFS by combining the output of both dams instead of switching completely from one dam to the other, the output would be the same. Thank you for your calls and emails to SRP for 100 CFS minimum, even while they are falling on deaf ears. #SRP #srpconnect SRWHMG.ORG ... See MoreSee Less